My goals are simplicity and good design, which is a surprisingly unique combination of goals when making rockets. I was looking online for instructions to build simple water-bottle rockets, but the designs were pathetic as the rocket would just flip around randomly both on the way up and down (even in the videos that they themselves provide). I was also unhappy with the lack of important details (for example, how does "wine cork" help me when I'm ordering supplies if I do not know what type?).

There were some very cool ideas with great instructions online, but they were sometimes very complicated. Yes, a parachute that deploys at the top is cool, but my simple and good design does not require a soft landing and, unlike a parachute, won't easily get stuck in trees. I wouldn't mind one day playing around with putting accelerometers, altimeters, cameras, barometers, etc. on a rocket, but this takes too much time and electronics for now. This idea for a launch mechanism is great, but the complicated mechanism is not something that students would have at home and does not help demonstrate the ideas of good rocket design. The design I ended up with (using corks) will not achieve such heights, but it is simple! Now, if you want very simple, you can always just buy a little toy!

Most online resources for simple rockets get into the details of how to construct the rocket with step-by-step instructions. This is not my goal. Basically, just put together the materials below with the help of the image! Then, add some water to the rocket, firmly insert the cork, then launch! As for the details, figure it out as if you were on MythBusters! The goal is to think about the design rather than just mindlessly following a bunch of steps. 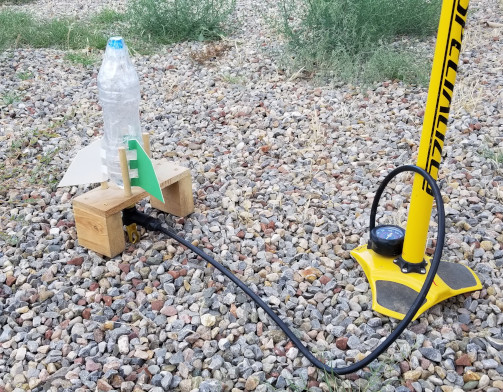 To calculate the best ratio of air to water, I did a few quick physics calculations assuming an adiabatic expansion of air from a pressure p1 (mostly determined by the cork) and volume V1 to the volume V2 of the bottle into pressure p0 of the surrounding air (p0 is no more than 15 psi). To maximize final speed of the rocket using conservation of momentum and mechanical energy, I calculated that the best V1 is about 2/3 V2 (so 1/3 is water), but this V1 should be larger (less water) if p1 is not many times larger than p0. I assumed that the air's momentum and energy negligibly affect the rocket (I only calculated the work done by air until V2 and not when it sprays out after that, and I ignore the momentum and energy of the air even before V2 is reached), and I ignored the "differential" speed of water by assuming that all the water leaves at the same speed regardless of if it leaves in the beginning or end of the spray interval (probably my least accurate assumption). By doing this physics calculation, I got approximate results in just a few minutes without spending a lot of time doing hard-core rocket science! I also calculated the minimum V1 needed to expel all the water (we do not want pressure becoming p0 before all the water leaves), and I learned that this should never be a concern unless there is far too much water. In practice, it seemed that a bit more water than my approximate value was helpful likely due to how the water moves "differentially" (which makes sense since the final small bit of high-speed water to leave provides negligible lift to the rocket for the same reason that air exhaust does not provide much lift). To explore this possibility, I used conservation of energy and momentum to do another quick calculation comparing a rocket that ejects water all at the same speed with a rocket that ejects the same water (using the same stored energy as before) giving half of the water twice the speed as the other half, and I quickly learn that the latter more realistic scenario gives the rocket a much smaller final speed, so I am mostly convinced that more water than 1/3 full can help give the rocket something to "push off of" for a higher percentage of the spray time.

After this, if you are still interested in rockets, consider building a model rocket and watching October Sky! Or, consider buying and playing Kerbal Space Program.